The world’s 5th largest smart phone brand Vivo is about to launch its latest smart phone range in Pakistan. The official launch is expected by first week of July right after Eid holidays.

The launch of Vivo is said to be one of the most anticipated event in smart phone category this year, as both trade and consumers have been waiting to see the arrival of much hyped product line. That hype was also boosted due to Vivo considerable success in Indian market during last year. According to IDC quarterly mobile tracker published on May 16, 2017, Vivo (10.5%) surpassed both closed rivals Oppo (9.3%) and Lenovo Group (9.8%) to reach 3rd most shipped smart phone brand in India during Q1, 2017.

Globally speaking the brand reached the number 5th ranked recently. As per the Q1 2017 IDC report Vivo now hold 5.8% share in global smartphone shipments making it part of the elite player thanks largely to its exploits in China and India. 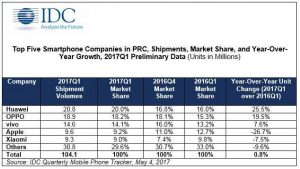 Initially Vivo team was tight lipped about the upcoming product range, however recently a price list has started circulating in the trade, according to the list we can expect three models Y53, Y5s and flagship V5s to be launch.

Looking at the expected portfolio and price positioning, we can afely assume that VIVO will be targeting 15,000 to 30,000 price segment and will introduce more products in similar price points with their traditional focus on Music and Camera features.

As any new entrants the expectation from Vivo is very high by all key stake holders in trade. If Vivo continues the same strategy that they have adopted in india (.i.e. Focus on channel development in 2nd & 3rd tier cities along with metropoliton cities, Aggressive marketing efforts and Comprehensive channel incentive programs) then we can expect Vivo might become a substanitial player within a year time.

Part of BBK Electronics VIVO was founded in 2009 at Dongguan, Guangdong, China. ViVO started its international expansion in 2014 when it entered Thailand, then they followed it up with further expansion in Indonesia, Malaysia, Vietnam, Myanmar, India and Philippine.

Get Cinema to your living room in ...